Frosty the Skidmark was a holly jolly reload, with a paper tube, an instruction sheet and two closures made of PLASTIC.

Frosty the Skidmark is a great load they say, he’s made of AP but only “EX’ers” know how he came to life that day.

There must have been some copperheads in that reload they bought from Ken that day, for when they placed it in his nozzle, he began a Sputtering HEY!!!

Frosty the Skidmark was as alive as he could be, all the rocketeers say he could launch any day just the same as A’s or B’s

Frosty the Skidmark knew the sun was hot that day, so he said, “lets light and get out of sight before the FAA.. takes, our waiver away”.

Down to Dan’s trailer, too mooch some fresh THERMITE, running here and there, all around the square saying, “LIGHT ME, IF YOU CAN!”

For Frosty the Skidmark had to hurry on his way, so Pleban pushed the button and said “Lets Pray” the Jolly Logix actually work today.

“NYPOWER will be back in MAY!” 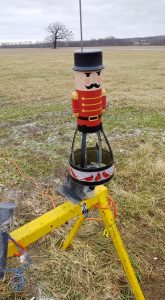 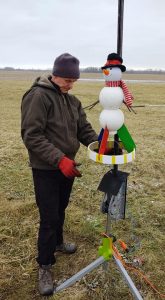